The anti-skinning castable is combined with pure calcium aluminate cement, and the alkali resistance and anti-skinning properties are different through the difference in silicon carbide content. When using, adjust the dosage according to the site of use to adapt to different sites.

The dust from the decomposition system of the rotary kiln and the alkali, sulfur, chlorine, and other alkaline vapors volatilized from the fuel will seriously corrode the castables and refractory bricks, causing crusts and blockages, preventing the passage of materials. The alkali resistance and abrasion resistance of anti-skinning will prevent the material from forming or clogging in different parts. It is also the meaning of anti-skinning castable.

Anti-skinning castables are characterized by stable chemical properties. The alkaline gas reacts to generate a viscous liquid phase, which will attach to the surface of the castable to form a glaze-like protective layer to prevent alkali corrosion. The material composition of silicon carbide is that it is resistant to erosion, abrasion, and is not easy to form the skin. An oxide layer on the surface will also be formed at high temperatures.

Sintered mullite, silicon carbide, zircon fine powder, SiO2 fine powder, and alumina fine powder used in raw materials. The bonding agent is combined with CA70 and CA80 cement. Especially the special castable for kiln mouth, with the increase of zircon addition, the wear resistance is particularly good. But the ratio must be controlled appropriately, otherwise, microcracks will appear.

With the continuous improvement in the later period, the performance after adding zircon is more perfect. The use period will reach 12 months. But in the control, we must pay attention to the proportion of addition. A proper ratio not only improves the thermal shock resistance but also the phase change will help buffer thermal stress and inhibit the growth of large cracks. Adding too much or too little zircon will deteriorate the performance, reduce the thermal conductivity, and increase the thermal expansion coefficient.

In short, the addition of proportions in the improvement is very important. The fusion of other raw materials in the most appropriate proportion will make the service life of the special castable for the kiln mouth longer. 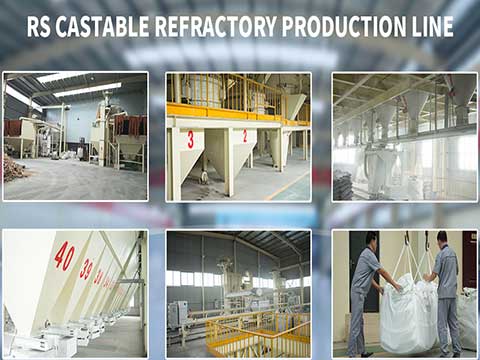